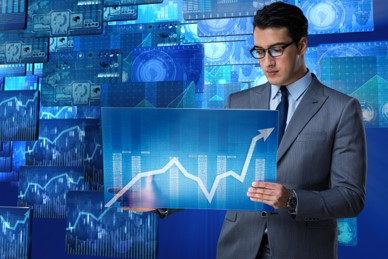 I’m noticing a pattern in the market this year that has been challenging.  The first half of the month has been generally positive, and then toward the end of the month, the market proceeds to sell-off.  This is how January, February, and March have played out, and it’s made it somewhat difficult to latch on to any persistent, directional trends.

But, as we have seen before, there can be extended periods of “meh” in the market.  Often traders get lulled to sleep by the slow movement, then bam!  A new trend can appear when you least expect it.  And sometimes, much of the entire year’s gains can be made in these short periods of time.

Our Mid-Term Cycle indicator has been negative this week and steadily worsening.  So far, the market hasn’t sold off as much as the gauge suggests.  However, it might still be too early.  When we designed it, the goal was to spot markets with a high probability of a quick sell-off.  The idea was to be more safe than sorry.  But when it gives a negative signal, we never really know if it’s going to be -5%, -10%, or -30%+ (like it was in March 2020).

In addition, on Thursday morning, our Long-Term Cycle indicator went negative but rebounded by the end of the day.  Had that stayed negative (when both the Long-Term and Mid-Term agree), then we believe it is time to batten down the hatches and brace for a bigger storm.  For the moment, that storm has passed, but we’re not in the clear yet.

All that being said, other data also suggests the end of March could be difficult for the markets.  But that same data also indicates that the market could calm down and resume its upward movement into April and May.  Beyond that, things could get interesting and volatile going into the fall season this year.  But for now, that is a long way off.

This month’s chart illustrates how 2021 has gone so far.  The blue line shows where the S&P 500 index closed at the end of 2020.  Since then, we’ve had moves up that seem to fall back to the blue line.  Right now, with our Mid-Term Cycle indicator showing a negative reading, it looks possible that the index could go back down to the blue line once again before resuming a move higher – even if it only lasts for a few hours.

Bonds – the bond markets are having a tough time this year.  As interest rates rise, the price of bonds falls.  The Aggregate Bond Index AGG is down -3.14% Year-to-Date.  High Yield remains the bright spot, and is right at break-even for the year so far (FastTrack Data).  Since we shortened the duration of our bond holdings last month, we’ve experienced less of the hit the bond market has taken.

Cycles remain short and opportunities to be in the market are still limited.  But we’re optimistic that it could change once we get further into the spring season.  Inflation remains an issue – so much so that during our monthly webinar (coming up on Friday, April 9th), Will Hepburn is going to go into more detail about Inflation… what it has done historically, and what we can do about it.  We hope to see you there!